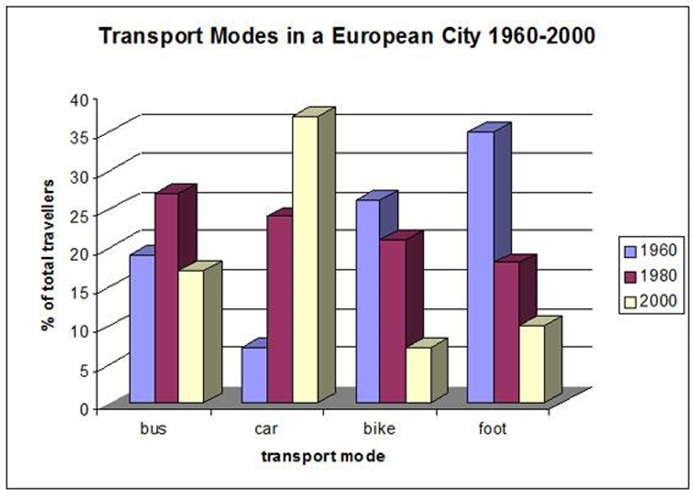 The bar chart illustrates the popularity of four types of transportation (bus, car, foot, bike) in a European city over a forty year period between 1960 and 2000. Units are measured in percentage of total travellers.

The most significant feature of the chart was the use of cars which rocketed during the four decade period. In 1960, only 5% of the citizens used cars, but by 1980 it had jumped to almost one quarter. This increase continued until the year 2000 reaching over 35%.

On the other hand, the use of bicycles and travelling by foot dropped significantly. In 1960 they were at roughly 25% and 35% respectively. By the start of the new millenium the percentages had fallen to 5% for cyclists and 10% for pedestrians.

Overall Summary (Most important part)
Summarise the main trends, patterns and differences between the categories and years.

Body Paragraph 1 (Explain most important information in detail)
In this section you should include specific data explaining the most important feature.

Body Paragraph 2 (Explain another important feature)
It’s really important here that you link to the previous paragraph. Notice how bicycles and walking are talked about in the same sentence. You should aim to do this.

Extra Advice
Use a range of verbs to explain the data. Also, try to change percentages to fractions.

Speak to me on Whatsapp